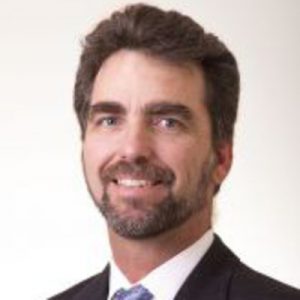 Dr. Johnson was born and raised just outside of Raleigh, NC. He received his BS degree Summa Cum Laude from NC State University. He attained his medical degree at Wake Forest University College of Medicine and while there he was elected to the Alpha Omega Alpha honor society. He completed his surgical residency at the Medical University of South Carolina, where he also served as chief resident. Following residency, Dr. Johnson served for three years as a general and vascular surgeon in the United States Air Force. Dr. Johnson is certified by the American Board of Surgery and is a member of numerous medical and surgical societies. He has published numerous journal articles on shock and minimally invasive surgery.

Dr. Johnson has practiced surgery in Carteret County since the summer of 2003. His practice encompasses all of general and vascular surgery. He has special interests in minimally invasive surgery, bariatric surgery, biliary surgery and surgical oncology. Dr. Johnson performed the first successful laparoscopic gastric bypass and the first laparoscopic adrenal resection completed at Carteret General Hospital. He has performed more than 250 Lap- Band surgeries and helped Carteret General Hospital become a Bariatric Center of Excellence.

Dr. Johnson is dedicated to a team approach to medical care. He maintains a close relationship with his patient’s primary care physicians as well as local and regional consultants.

Dr. Johnson lives in Morehead City with his wife and daughter. He is active in a variety of community service projects, and is also an avid hunter and fisherman. He practices at Carolinas Center for Surgery and operates at The Surgical Center of Morehead City and Carteret General Hospital.